During the first two weeks in August I followed the antics of two young red squirrels born earlier in the year.

I have named them Marmalade and Sooty. Early morning would always see them arriving for a hazelnut breakfast. 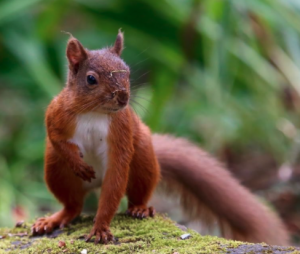 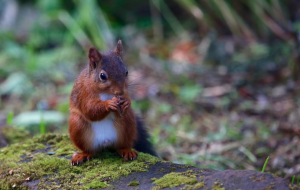 Sooty would always travel up to the feeder using the low stone wall to the side of the woodland walk.  Occasionally he tried the rope handrails to get to the feeders. Obviously his balance skills are needing more practice.

Marmalade always came from a different direction in the mornings. She liked to creep around the back of the trees to reach hazelnuts I had carefully placed. Her skills in retrieving hazelnuts over the two week observation period were brilliant. No matter where I hid the nuts she discovered them. Marmalade seemed to enjoy eating a hazelnut breakfast upside down. She did this on several mornings. Every morning visit she made for breakfast she searched every crevice for the hidden nuts.

Sooty opening a hazelnut can be heard from quite a distance – his teeth gnawing at the shell. If you are in the woodland walk you will know if a squirrel is in the area because you can hear its teeth working away, like little bandsaws.

Sooty would grab hold of a hazelnut between his paws, turning it several times to determine its contents. Sometimes he would find a bad nut and discard it – a lighter nut may have a shrivelled or absent kernel. This next photo shows Sooty breaking into the hazelnut using his front two sharp incisors. His teeth will continue to grow throughout his life-time as they are worn away at the tip, just like our fingernails.

I observed how Marmalade seems to clasp her nuts in her mouth and then be intent on burying them. I hope she can remember where her buried nuts are in winter. I did wonder if another red squirrel is just as likely to find the buried nut in winter.

I watched many times as Marmalade and Sooty used one half of the nut as a saucer. Alternatively,some red squirrels might hold the nut, and tear off chunks of shell until the kernel can be extracted. Possibly they could learn either technique from their mother. The second photograph shows a nut opened by Marmalade or Sooty. They both use the method of using one half as a saucer.

In my two weeks of observation on Marmalade and Sooty I was sometimes joined by other Underscar owners. They were as delighted as myself to see the red squirrel colony looking so healthy.

We loved the way Maria has captured and depicted these beautiful reds enjoying their hazelnut breakfast at Underscar in their natural habit. As Maria said, it’s wonderful to see them looking so healthy in her pictures.