As the air takes on the fresh crispness of autumn and we head towards winter the Lake District reveals why it is such a rewarding location to explore on foot. With crystalline skies, sparkling views of fells tops dusted with snow, it’s the ideal time to make the most of the tranquillity of the landscape that has moved generations of writers, artists and filmmakers.

With the hustle and bustle of summer, replaced with a calmness, it’s the perfect time to grab your walking boots and head to the fells. Be inspired to explore Blencathra, a fell that was described by Wainwright as ‘one of the grandest objects in Lakeland’ and was more recently documented by award-winning film-maker Terry Abraham’s ‘Life of a Mountain: a Year on Blencathra’.

Of all the northern fells in the UNESCO World Heritage Lake District National Park, there’s something for everyone, from an easily enjoyable ramble for families to challenging routes along ridges with sharp drops for experienced hikers. Many of these routes start in or around the pretty village of Threlkeld. Wainwright devoted over 36 pages in his walking guide and described 12 different ways to ascend Blencathra and more recently television presenter and outdoor walking enthusiast Julia Bradbury, described her favourite route in her Outdoor Guide. 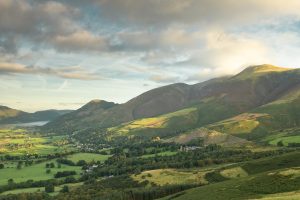 Castlerigg Stone Circle described by archaeologist John Waterhouse as “one of the most visually impressive prehistoric monuments in Britain” is a stone throw away and is at its most dramatic at this time with the long shadows thrown by the winter sun. It’s thought that the stone circle was built sometime between 3,300 to 900 BC, during the Late Neolithic and Early Bronze Ages.

Whilst contemplating its purpose, visitors can enjoy views of some of the highest peaks in Cumbria; namely Helvellyn, Skiddaw and Blencathra.

A short drive away hikers can explore the many iconic routes in the Ullswater Valley.  There are miles of bridleways linked to the Ullswater ‘Steamers’ landing points that cater for all abilities. The most spectacular and famous walking routes can be found here; from the might of Helvellyn and Striding Edge, to the remote valley of Martindale offering access to an expanse of seldom-walked fells. The seven-mile lakeshore walk between Howtown and Glenridding, or the family-friendly footpath at Aira Force are both very popular with walkers.

“Nothing beats the energising feeling of hiking in the bracing winter air with crisp grass underfoot. Winter in the Lakes is one of my favourite seasons. The range of cosy apartments at Underscar offer the levels of comfort much needed after an active day on the fells and practical touches such as plenty of space to dry coats and leave muddy walking boots.”